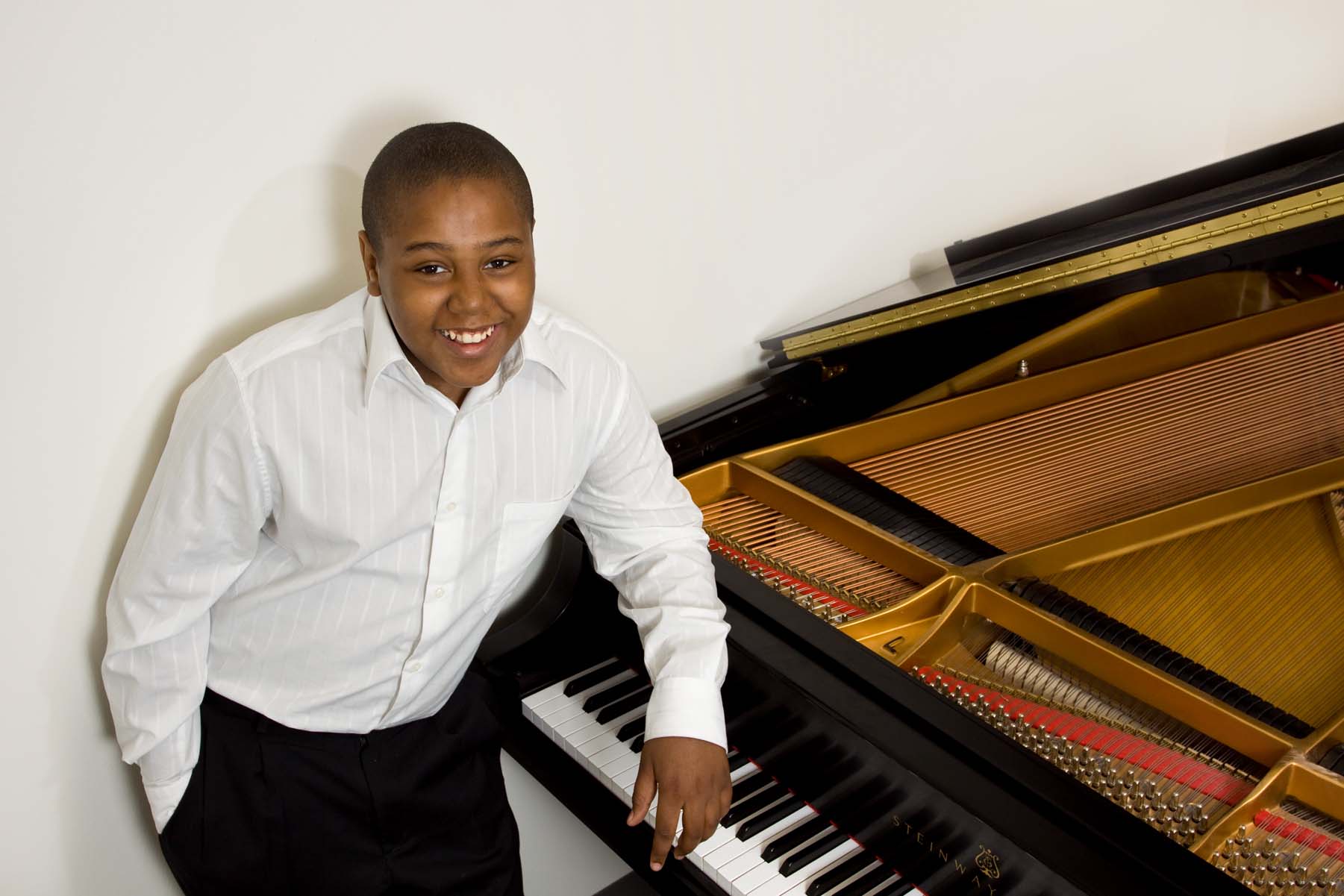 There is no better way to begin a conversation about music than to begin it with Lewis. His personal statement in What Music Means to Me is an evocation of the pure joy of making music and sharing it with others. Lewis wrote his statement for this project at the young age of twelve, somewhere between the ambiguity of youthful exuberance and maturing perception. His testimony shows exuberance, wisdom and mystifying curiosity joined together. He has often been described by his teachers as an “old soul”, as a person who has a deep understanding of music and the world around him well beyond his years.

Lewis opens his statement in this compelling way: “When I play the piano I feel like I’m in an empty white room. It’s a place where I’m alone with God.” As a photographer, these words provide a wealth of imagery and possibilities. It was incumbent upon me to photograph Lewis in a white room. The words “white” and “God” call to mind heaven or paradise, even a dream. Lewis is firmly grounded in his faith. The goal was to capture him in his paradise, but the real challenge was capturing Lewis within himself (and God). 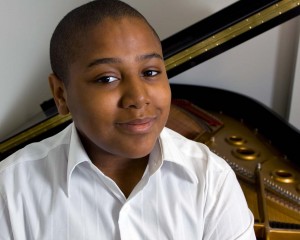 In recent months, Lewis has been busy at home practicing and learning new repertoire, entering competitions and performing in classical and popular music venues. His astonishing ability to improvise has accorded Lewis participation in the Van Cliburn Foundation’s Musical Awakenings; a program designed to teach children about the basic elements of music through the piano in a fun and interactive way. The 45-minute programs are presented to second, third, and fourth grade students primarily in the Fort Worth area. Lewis’ part includes a performance of a prepared piece followed by what is called “On the Spot”. In this segment, Lewis a takes suggestions such as songs or sounds from the audience and creates a completely improvised piece. He loves the challenge of spontaneity, but seeing the excited reactions of the students are the most rewarding for Lewis. By the end, they want to learn to improvise too.

This year, Lewis wants to enter concerto and solo competitions, with his eye on the Lynn Harrell Concerto Competition in Dallas this spring where he will enter with the Grieg concerto. He will be competing at the Music Teachers National Association Convention solo piano competition held in Milwaukee this March. Earlier this year, he was a featured performer at the dedication of the Annette Strauss Artist Square, near the ATT Performing Arts Center. Several luminaries were in the audience, including Ross Perot and Dallas Mayor, Tom Leppert.  Last winter, Lewis was the chief pianist for the Christmas Program at the Gateway Church in Dallas, a widely recognized production in the area. 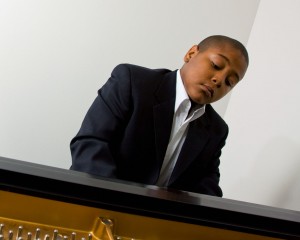 With the extraordinary opportunities Lewis has enjoyed, one has to wonder how he copes with the stress that comes with performing. Inevitably, there are successes and many disappointments for any pianist. His mother, Shirlett, sums up her son in this way: “Lewis has a sense of calm about him. He’s learned to manage the highs and the lows. Music is so much a part of him and he works hard in order to perform well, but he doesn’t stress out over it.” Continuing, she says, “He’s very professional and humble about it. He does his routine and keeps things in perspective. After all is said and done, he’s still got to come home and practice new repertoire.” As for Lewis, he always returns to his faith and says “God shows me favor in many ways.”

Cooking, Exploring, and the future

When Lewis was asked what he likes to do after the hours of practice, he had to think about his response. “I enjoy my new puppy, Rocco. I like facebook and being with my friends.” His mother added, “Lewis is a foodie, he is always critiquing food. He loves to cook and experiment. The other day he made a dip out of sour cream, honey, and a spicy Asian sauce – it was good!”

Lewis doesn’t venture out of his musical world for long, returning to the piano and learning new repertoire. His aspirations for the future are to study music and achieve the highest level – a doctorate. His motivation and balanced have always been evident and were poignantly expressed in late 2009 when Lewis performed at a Southern Methodist University TEDx event. The focus of the evening was: What can we do to change the world? After performing Debussy, Lewis was asked what would change the world for him. He responded by saying: “When Bach was alive he was a Kapellmeister. He wrote music for the church and his music changed the world. I think if I could be a modern day Kapellmeister, that would change the world for me.”

Indeed, wise beyond his years…

Blog, gallery, News, Profiles from What Music Means to Me

What Music Means to Me 2022 | Powered by WordPress.